I finished my Stryker RC plane today. The only thing I had left to do was mount the motor, which I am very pleased with. I decided to use the stock motor mount with a very small adaptation to mount the Tower Pro 2409-12 motor that I bought from unitedhobbies.com. I used a technique I read about on one of the RC forums (rcgroups, rcuniverse, wattflyer) involving the plastic lid of a soda bottle. Since the 2409-12’s mount holes are in different positions than the stock motor mount, I drilled 3 holes into the bottle cap to mount into. I used my razor blade to chop away the vertical cylinder of the lid, leaving only the flat disk, which fits perfectly inside the Stryker mount. Here’s a picture of the sode bottle lid bolted into the stock motor mount (on the other side sits the aluminum mount that came with the 2409-12 motor): 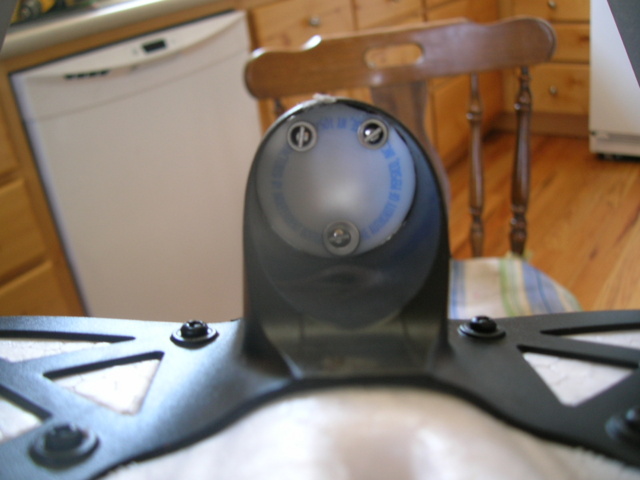 The bolts included with the motor from unitedhobbies.com were too short to fit through both the bottle lid the stock mount, so I had to buy some 2-56 metric bolts from Radio Shack for $1.99 (the motor 2409-12 mount’s holes are drilled for a 2mm bolt). From the back, you can see how the three bolts protrude with plenty of room: 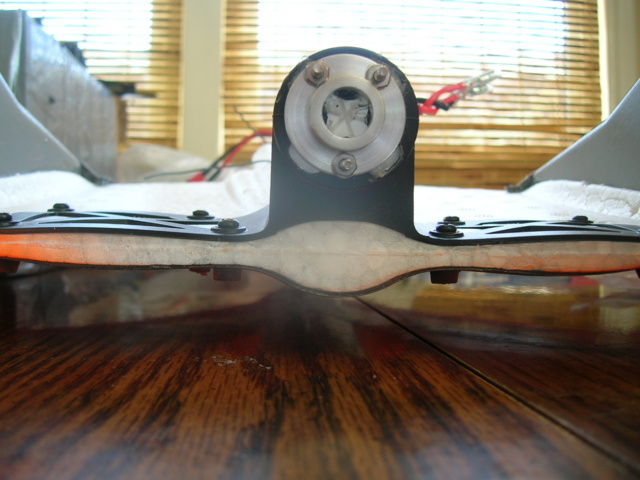 The bottom bolt fits into the bottom hole of the stock mount, but the other two sit at approximately 11 o’clock and 1 o’clock. The mount is amazingly sturdy as the bottle cap and mount are squeezed in between the bolts’ washers and the aluminum mount. While working with the mount, I realized I needed to remove the bell from the motor mount to accommodate my fat fingers. After I mounted the aluminum plate, I put the motor back on using the two Allen screws. Here’s what it looks like ready to fly: 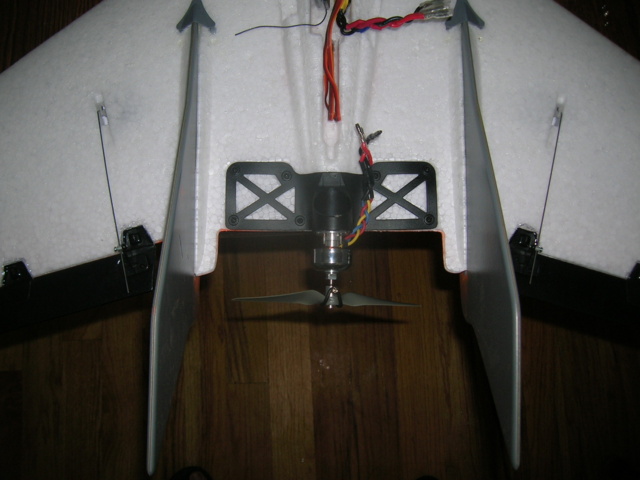 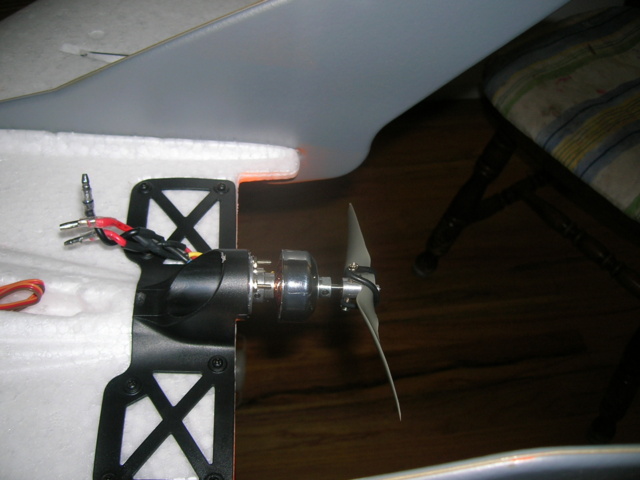 I did some glide tests and partial-power tests in my backyard today and it seems to fly level and smooth. I had to spend some quality time with my DX6 to adjust the servo travels because it seemed that when I applied full back stick, the right elevon moved farther than the left elevon. I knew that this would cause the plane to roll, so I reduced the elevator channel’s travel down to 50% in both directions. That’s what it took to make the two elevons move evenly with elevator. I setup low rates at around 70% for both elevator and aileron channels and they seem pretty good. I think I will probably fly the maiden flight with the elevator on high rates and the aileron on low rates. The maiden flight will probably happen this week some time.

For the maiden, I’ll try to borrow a friend’s Align 2200mah 3S lipo, which should provide lots of power. If it’s not available, I’ll use my 8-cell 1500mah NiMH pack. Currently the CG seems to be spot on with the 8-cell pack.