Maiden Flight of the Super Cub

I anxiously unboxed my long-awaited model airplane today: The HobbyZone Super Cub. I decided to document the assembly process and first flights with lots of photos. Read on for the log.

The package arrived in a brown box about 5 feet long. Here’s what it looked like coming off the FedEx truck: 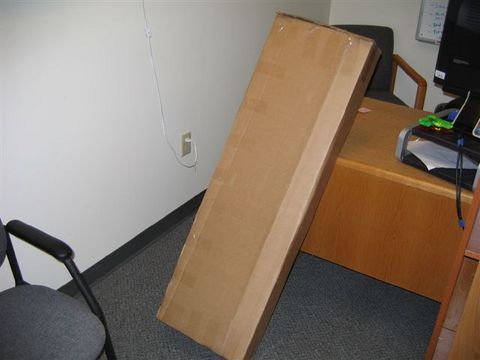 The plain brown was just a protective covering, housing a more “marketing approved” box from HobbyZone: 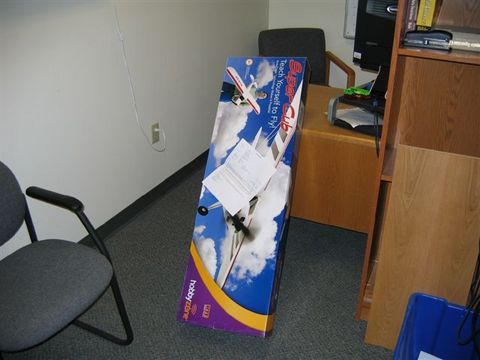 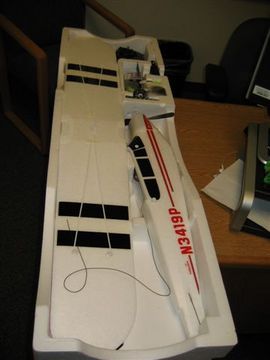 And for a close-up of all the little stuff: 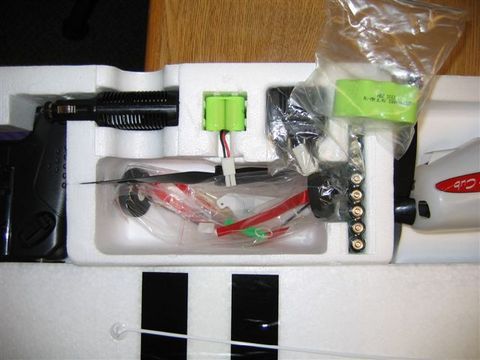 Now came the fun part: Assembly. This airplane is just about ready to fly out of the box. All you have to do is put the landing gear on, attach the wings, attach the tail section, and charge the battery. HobbyZone even includes a screw-driver that theoretically fits all the screws, thoughÂ I found it insufficient to handle the screws that hold the wing struts to the bottom of the battery box. This is as far as I could get with that wimpy little screw-driver: 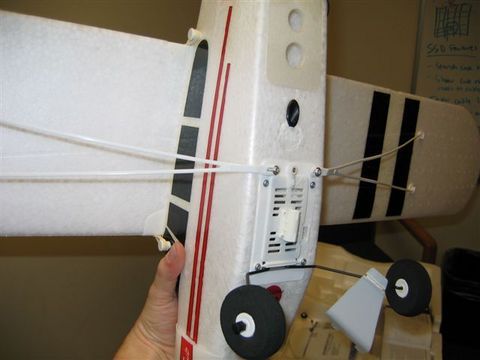 Notice how the screws are sticking out by about 0.25 inches. I just couldn’t make it happen with that little green screw-driver. Oh well. Onward we go. The wings attach via the struts I just talked about and 4 rubber bands that go criss-cross and straight over the top of the wing to attach to two plastic posts that stick out of the fuselage right above the cock-pit windows.

The landing gear attach into a slot in the battery box. You have to squeeze the wheels together and slide them in left, then right to get them to go in the slot. After that the wheel skirts attach with 2 screws each. These screws went in much more easily than the wing strut screws. 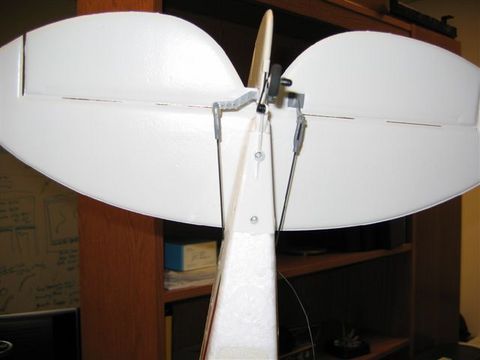 Now the plane was all assembled. Behold, the Super Cub: 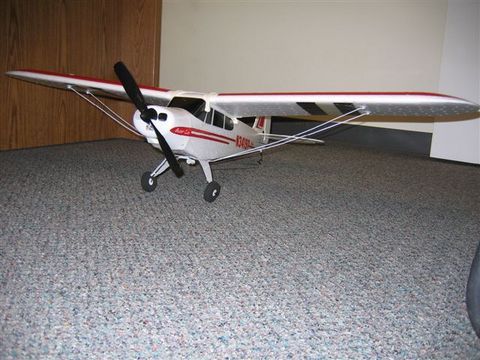 Looks pretty good. I decided to take it out in the parking lot behind my office to taxi it around on the concrete a bit. This proved pretty fun, but I nearly destroyed it a couple times. I got airborn several times, once to over 5 feet on cement. Panic took control and I of course over corrected while simultaneously swapping thumbs mentally. The result: I sent it full throttle into the cement, nose first. I was amazed that I didn’t break a prop. All the crash did was put a tiny hole in the nose, as show here (the hole is just below the rectangular hole that is just below the prop): 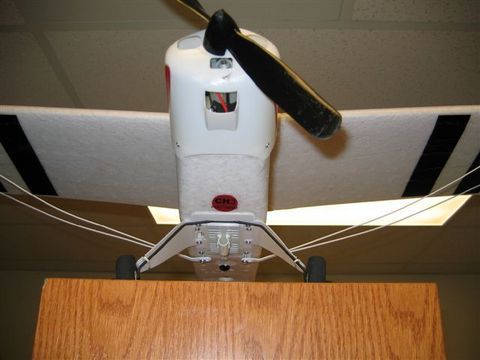 Well, so far no damage done, so I decided to head to the park. Once at the park I went through the pre-flight setup: I did the range check, looked over the control surfaces one more time, and I was ready to go: 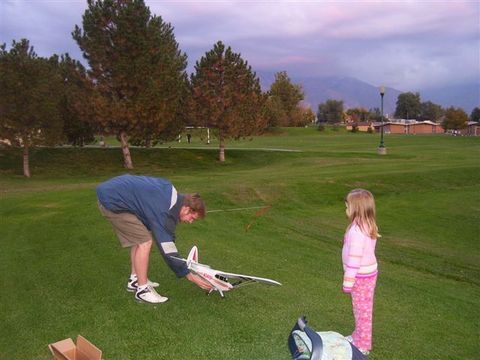 “But wait,” you say. “You forgot to check your trims.” Well, that’s right, I totally forgot to look down at my trim settings, and it turns out they were set to maximum down elevator and maximum right rudder. Well, let’s just say this did not make for a great first flight. Before this plane, I had flown a few AeroAces for a few months, and was quite good at flying those little toys. I never had to worry about trim with those, since a bad trim could easily be adjusted in flight. Here’s a photo of me ignoring my trim settings and preparing to hand-launch the plane: 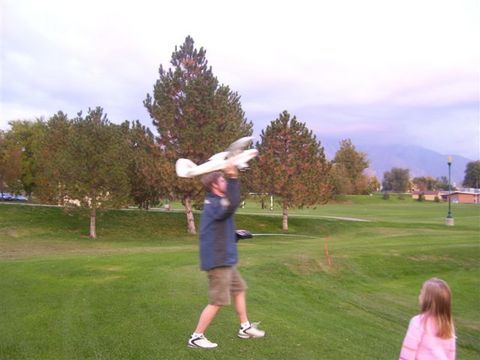 Yes, that’s me throwing the Super Cub in the right hand, holding a badly-trimmed radio in the left hand. Smart.

The result: The plane flew downward and almost hit the ground right away (I wish it had). I pulled back on the stick and recovered. Then, I noticed the plane pulling to the right. No problem I said, I can climb out of it and fix my trim when I have enough altitude. The plane shot about 50 feet to the right and crashed into a lip of grass like the one you see to my right in the photo above. Here I am running to get my crashed plane after my first unsuccessful flight, hoping that the Super Cub would fare well despite her idiot pilot (me): 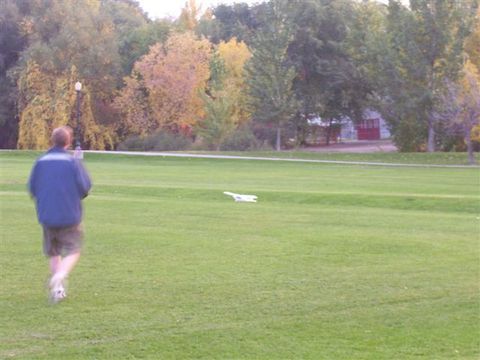 I picked up the cub to discover a plane in good condition, with only one minor caveat: One half of the propellor is totally missing. I decided to run home and get my tools to make an emergency, field fix. This is where I stopped taking pictures, mostly because I was so mad at myself for not looking at the trims before my first flight. I was at least slightly comforted by the fact that HobbyZone had included an extra prop in the box.

After returning to the park with my tools (I left my wife and kids with the plane), I discovered that none of my wrenches were small enough to fit the nut on the prop. I sat there sulking for a moment when it occurred to me that I could use the other prop to get the nut off.

Helpful Field Repair Hint: You can replace a broken prop in the field with no tools by using the new prop as a wrench. One side of the prop fits the hex nut, and, assuming the nut isn’t too tight, canÂ be used to unscrew the nut. I was thrilled. I did the same thing to put the new prop on the shaft. It worked great, and in 2 minutes, I was ready to fly again. I guess that was a wasted trip home for the tools.

I picked up the plane and tossed her again, this time checking my trims. I flew around a few laps and was suprised by a few things:

After a few mild crashes with no damage, I thought I’d have one last flight before dark (famous last words). This time I flew it high enough to avoid mishaps and it was a great smooth flight. I circled the park with one big sweeping turn and things were looking good. I decided to see how the plane would react to a little down elevator, so I pushed forward on the stick a bit. The plane went into a dive and lost about 50 feet of altitude. My brain was about 2 seconds slow to process this event, and I pulled back on the stick a bit too late to fully recover. I got the cub to almost level about 5 feet off the ground, but by then it was too late. The prop hit the ground hard, and broke, and this time the landing gear hit hard too. Since the gear is connected to the battery box, it ripped the entire box out of the plane. It appears that none of the electronics are damaged, and the box is in one piece, but the foam around it is a mess: 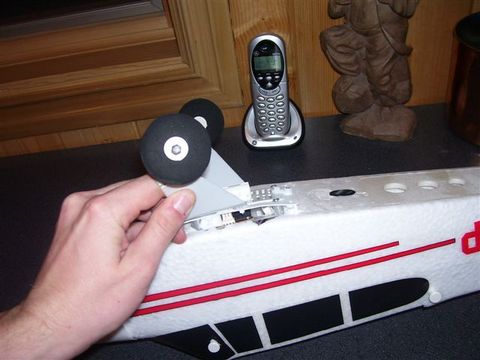 So now I’ve got two problems: I need another replacement prop (or three), and I need to resecure the battery box back into the fuselage. If anyone has ideas how to do this, by all means, please let me know.

Well, that’s the maiden flight of my HobbyZone Super Cub. I hope you enjoyed it.

57 comments to “Maiden Flight of the Super Cub”