This article is the continuation of Part 1 of the Super Cub aileron upgrade tutorial.

I finished installing the servos for my aileron upgrade today. Here’s what they look like in action:

Thanks to the Spektrum DX6 radio, I can flip the “flaps” switch, and both ailerons go down (called flaperons). This supposedly will give more lift during take-off and landing, so I can keep my speed down without losing lift. To get the flaps to work, I had to set the travel adjustment on my radio to positive 0% and negative 100%. This wasn’t readily obvious to me at first, and it took some tinkering to figure it out. Otherwise, the ailerons would swing upward in non-flaps mode, and downward in flaps mode. That would not be desirable, though I’m curious to know how the plane would fly like this.

Here’s what the servo and push rod look like installed: 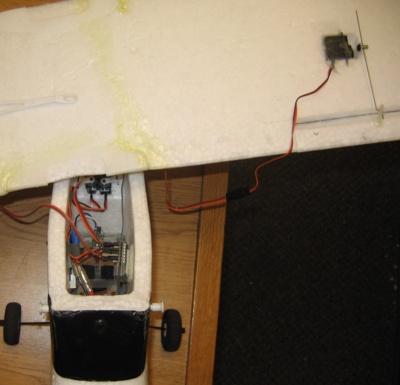 You can also see 5 of the 6 channels plugged into the receiver. This is because each servo needs its own channel to operate in flaperon mode. If I just used a Y-harness instead, then I could have saved a channel, but I wouldn’t get flaps, and we simply can’t live without flaps, can we?

Here’s another close-up of the servo mount from the bottom of the wing: 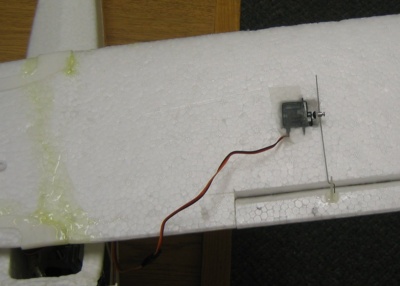 I connected the push rod to the servo control horn with DU-BRO EZ connectors. They make it so you can adjust the length of the push rod more easily by tightening and loosening a screw. The other end of the push rod attaches to the control horn on the aileron, with a simple dog-leg bend (two 90 degree bends, actually). I used two needle-nosed pliers to put the bend in the rod. This should prevent the rod from coming out of the control horn during flight (yikes).

I haven’t inserted the wires into the wing yet. I plan to cut a very thin slice along the bottom of the wing, and shove the wire in it without having to tape it shut. We’ll see if that works.