This weekend I upgraded my HobbyZone Super Cub R/C plane to use the Spektrum DX6 radio. I started by tearing out all the proprietary HobbyZone electronics. This includes the big black box (which is a receiver and speed controller), and the slow, huge ParkZone servos. To replace them, I used two of the four servos that came with my DX6 radio, the AR6000 receiver that also came with the radio, and an Electrifly C-7 speed control.

I mounted the AR6000 receiver on the side of the cockpit with a bit of velcro, like this: 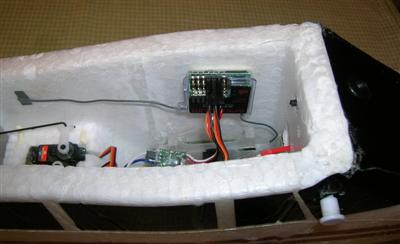 Read on for details…

Two cool things to note about the new Spektrum receiver:

1. It is super small. Compared to the HobbyZone proprietary receiver, it is a feather weight.

2. Its antennae is only a couple inches long. There are two antennae, but they are both so small that they can live entirely inside the cockpit.

The Electrifly speed control is also very small. So small, in fact, that you almost don’t even notice it. I didn’t need to fasten it to anything, so it just floats like a piece of wire. The battery is connected directly to the speed control, and the speed control connects to both the motor and the Spektrum receiver. Here’s a shot from the top of the cockpit to show you: 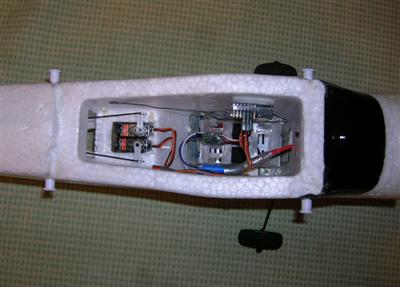 In that picture, you can also see the two sub-micro servos. These servos are smaller than the HobbyZone servos, so I glued two pieces of cardboard behind them in the hole. That made a nice, snug fit for the servos. With a little bit of epoxy, they are nice and secure. The other cool thing about these servos is that they have quite a bit more travel than the HobbyZone servos. This means my tail and rudder get to move a lot further than before. This should make for better aerobatics (though I haven’t gotten it in the air with all the snow yet).

I ran the servo cables along the other side of the cock-pit and taped them to the wall with a bit of duct-tape to make sure they don’t get in the way of anything. Here’s a shot of the cabling: 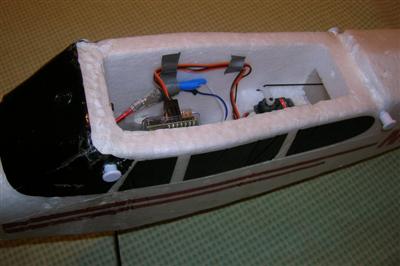 The last thing I did was cut off the battery connectors and change them to Deans Ultra Plugs. These are pretty awesome connectors according to the internet at large, but don’t make the mistake I did by leaving the male and female plugs connected while soldering. I did this with my first one, and I could never get them separated again. Here’s a picture of the battery box without the battery. You can see the Deans connector in this shot:

All told, I am very impressed with the Spektrum DX6 so far. I’ve been fiddling with the programmable features, like servo travel, and it’s really cool. I even hooked it up to my computer’s sound card and I can fly planes in FMS with it. It’s pretty awesome.