Communication Between Directives in AngularJS

Warning: This article is long and thorough. If you’re in a hurry, you can skip straight to the final product here:

Prerequisites to this article

Before reading this, get to know these AngularJS terms. You don’t need too much depth, but you need to know what they are:

You should also peruse the Angular Developer Guide, but don’t feel bad if a lot of the jargon does not make much sense at first.

We’re going to create two custom directives that communicate with each other. We’ll really dig deep into the first directive, explaining every line of code as we go.

Then we’ll glue the directive to a controller via a scope object.

Lastly, we’ll create a second directive and glue it all together.

For this example, we’ll create a custom search box that can be placed in our app with a custom <my-search-box> element. This directive causes Angular to convert <my-search-box> in your HTML into <span>My Custom Search Box</span>. This is not useful yet, but it will become immensely useful as we grow this concept in a few paragraphs.

We’ll create a file called “app.js” with this content:

Let’s walk through each line of that directive:

This line declares a new module called “MyApp”. The empty array to the right can contain the names of other modules on which this module depends (this is where you would put AngularUI modules for example if you want to use AngularUI). In this case, this module happens to be our “main” application module, but Angular really doesn’t know that from this line of code. That happens in the HTML with <html ng-app="MyApp">. Also, you only declare your main application module once, even if you have many directives. There are ways to look up your module if your code spans multiple files, or you can just create a global variable to reference your module and use that when building your directive.

This tells Angular that “my-search-box” must be an element. Angular directives can also exist as HTML attributes, HTML class names, and even HTML comments (!). It’s okay if this doesn’t make sense yet.

This is the directive’s HTML template that will be rendered by the browser. I don’t recommend using hard-coded template strings in your directives like I’ve done here. I do it this way to make the example clear. Normally, I use the templateUrl property and serve the HTML as a “partial” from my web server. Angular caches these partials, and you can even pre-load them when your app loads. This way, I can use server-side template technologies for things like localization. Although, for the best performance, I recommend that you serve these partials statically from a CDN or other fast caching service.

Now we can use this directive in our HTML like this:

When you visit that page in your browser, you’ll see “My Custom Search Box” if all went well above.

So far this is a pretty useless directive, but we’are about to take it to the next level.

Step 2: Giving your directive its own scope

Each instance of a directive has its own scope. And of course, the scope is a child of the enclosing scope where you instantiated the directive in the HTML. For example, if your directive exists inside a <div ng-controller="MyController">, then your directive’s scope will be a child of MyController‘s $scope.

Let’s define our directive’s interface to the outside world using the scope property. Our interface will have two values: searchText and isSearching. We will use searchText to store the user’s search text that they enter into an <input> box, and we’ll use isSearching to tell the directive when a search is in progress.

Did you see the scope = {...} property above? That defines the public elements of this directive’s scope. Notice how we used '='? That tells Angular that we want a scope variable to have two way binding to the outside world. This is part of the directive’s HTML interface. This allows callers to use our directive like this:

In other words, the directive allows outside callers to bind their own scope variables to this directive’s searchText and isSearching variables. This is how you communicate with the directive from the outside world.

In the code above, the search-text gets normalized into searchText in the directive’s scope. Likewise, is-searching becomes isSearching.

These scope variables are useless unless we also make them visible somehow, so let’s modify our template HTML to use them. While we’re at it, let’s make this actually look like a search box instead of a simple piece of text:

Remember, I suggest you use templateUrl instead of template when your HTML starts to grow like this.

Now we have a search box form that lets the user enter some search terms, which we store in the directive’s scope as localSearchText. Notice that we didn’t put localSearchText in the scope: {…} definition, because it needs no external binding. In other words, this is a “private” scope variable that the directive uses to store the human text input until we are ready to actually do the search. This is because we don’t want every single keystroke to initiate a search. Only when the user clicks the “Search” button.

Notice also that we added a controller with controller: function($scope) {...}. This code defines a typical controller so our directive can take action in response to user input, like button clicks with ng-click.

After making these changes to app.js, our page should look like this:

Now that directive is finished. Notice it doesn’t do much. It requires an outsider to stimulate it into action.

Let’s create a controller that communicates with the directive we wrote. This isn’t strictly required to allow two directives to communicate, but in most cases it will be necessary because someone has to glue them together with the business logic specific to your application. This is a job well suited to an Angular controller.

Let’s make a simulated city search that allows the user to search for cities. Because it’s an example, the search will always return the same results.

And the accompanying controller, which I placed in app.js:

This controller’s $scope.citySearchText and $scope.isSearchingForCities variables are bound to the directive’s scope variables searchText and isSearching because of the HTML attributes that we specified on <my-search-box>.

This controller is pretty basic, so I won’t describe every line of code. All it does is $watch() for changes to citySearchText and get some fake search results with Angular’s $timeout service.

Because of Angular’s excellent isolation-centric design, this controller would be very easy to write unit tests for, but that’s another article.

When you visit the page, you should now see a search box. If you enter some text into the input box and click “Search”, you’ll see a spinner for 1 second, which then disappears:

Now we’re ready to add another directive. For this example, we’ll create a search results directive. This directive has almost the same public interface (i.e., scope) as the <my-search-box> directive, with one extra variable: the actual search results that caller wants to display.

Everything should look familiar from your study of the first directive. There are no new concepts here. Let’s use our directive in our HTML:

Now your page should show some search results after clicking the “Search” button and waiting for 1 second: 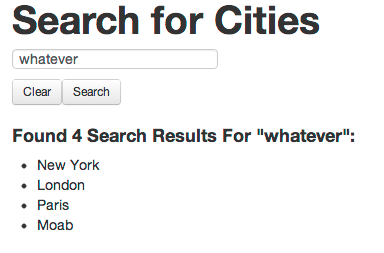 Just to prove that there is indeed zero coupling between the two directives and the controller, I added a second controller and a second instance of each directive to search for fruits, which you can see in the plunk below.

From the sheer length of this article, you may think that this is complicated, but the reality is that it only took me about 30 minutes to whip together the working example in the plunk.

Main points I hope you took from this article:

13 comments to “Communication Between Directives in AngularJS”