Well, I upgraded my L-39 jet’s motor and re-maidened it. I don’t want to give away the ending but it wasn’t pretty. The new motor was fantastic. It bolted in with no modifications to the plane, and provided lots of thrust over the stock motor. It was great.

The added thrust helped control the plane. Without it, I would have been toast out of the gates (like last time). The take off was uneventful other than the 90 degree right roll on launch and the first turn which almost crash landed the plane right into the adjacent road. Yikes! Here’s the video:

Everything was going okay, but it was extremely twitchy and stall happy. I think it’s too heavy, cause I was fighting to keep it aloft the whole time. I held my own for a few minutes, and then the low-voltage cut off kicked in. The motor must have been pulling more juice than I realized. I was up wind, which was a problem because the wind was blowing at about 10-15mph. Nevertheless, I managed to bring it in for a nice soft landing. Well, “soft” is relative. The plane touched down at the same spot where the only obstacle in the whole park was sitting: a sideways metal pole. Oops. Here’s the video and crash site photo: 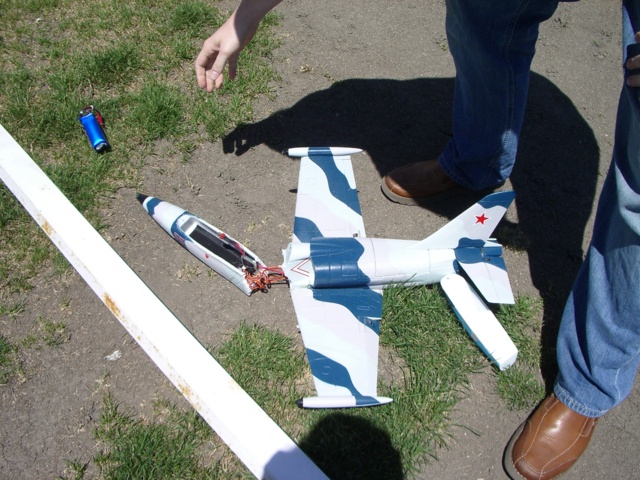 You can’t tell very well from the pic but both the wing and horizontal stabilizer are bent, because they went under the poll while the rest of the plane went over it. Not pretty.

Oh well. Live and learn. My battery was badly puffed (due to the low voltage and high amp draw I’m sure), but it subsided back to normal. Not sure if I trust it for another flight yet, but I will definitely be keeping it in an ammo box and carefully monitoring its voltage before I use it again.

Thanks Cliff for filming!