After a few solid crashes with my new RC plane, I noticed that its battery box started to come loose. It’s a HobbyZone Super Cub, and even a semi-rough landing on thick grass can cause it to come loose. Read on for pictures and an explanation of how I solved the problem.

I used cardboard, 5-minute epoxy, scissors, and a screwdriver to complete this repair job.

The Super Cub’s battery box has two parts: The white plastic lid that covers the box (and includes the battery door), and the clear plastic box that sits inside the plane’s fuselage. They are connected with 4 screws in the white lid. Start by removing these screws. Also remove the wing strut screws. Now, the white lid will come completely off the plane. The white lid does have 4 plastic posts in its corners that burrow into the foam fuselage. On my plane, 2 of the 4 posts had already broken off completely when I did the repair, but I don’t think it will cause many problems.

Note that the white lid is not the piece that holds the battery box into the plane, so don’t glue it in. Glueing in the lid will only lead to more breaks in the future.

On my plane, there wasn’t enough foam left around the battery box to work with, so I got some cardboard and started to work around the missing foam. By folding the cardboard, I was able to make some 90 degree angle braces that the battery box could be fastened to. I then glued these angle braces to the interior of the foam fuselage. This picture shows it pretty well: 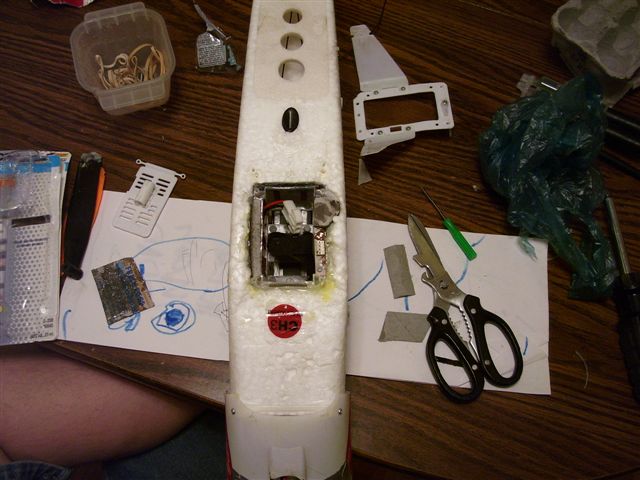 I also noticed that my foam hole was really too big for the battery box, so I glued in some spacer cardboard inside the rear of the hole. To this I glued the back of the battery box for a more snug fit. You can’t really see it from the picture.

I wanted more surface area to fasten the front of the battery box to, so I cut a 4″ strip of cardboard and inserted it into the landing gear slot of the battery box, and wrapped it around the underside of the foam fuselage, like this: 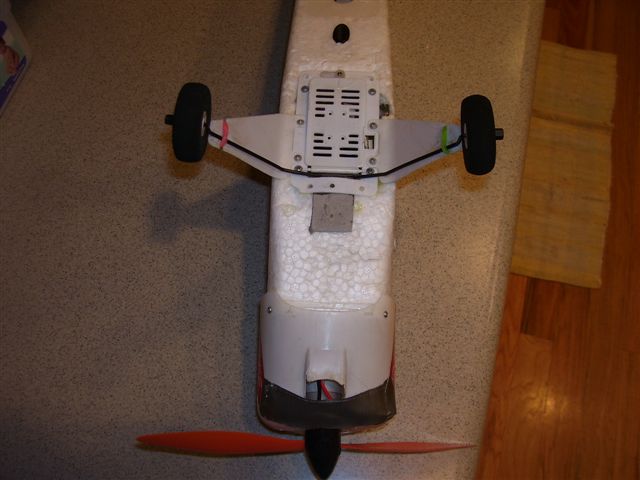 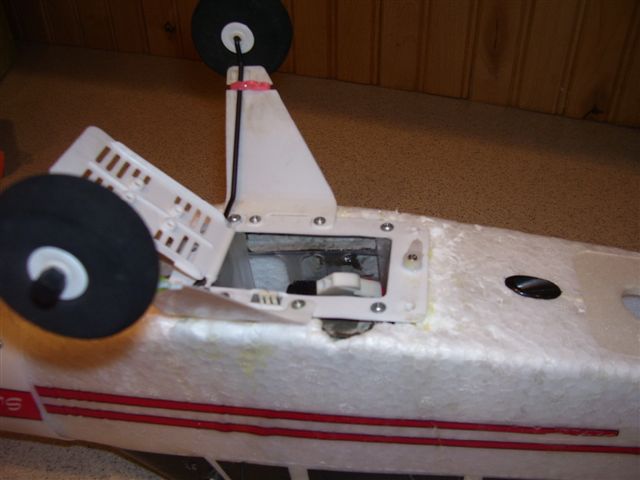 Notice that on the right-hand side (pilot’s right), there was not enough foam to work with. I cut an odd-shaped piece of cardboard to match the odd-shaped hole in the foam, and it is very strong. A better approach may be to cut out the jagged foam, and replace it with a new piece of foam, but this seems sufficient.

Now it’s extremely sturdy. I’ll be flying it tomorrow to see how it holds up.