Never tell me the odds! 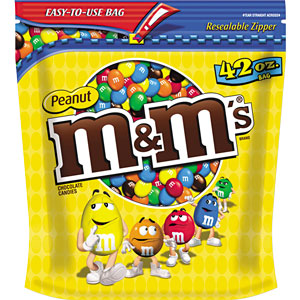 M&Ms are yummy. At work we have ginormous bags of M&Ms to snack on. One day I reached into the bag and pulled out a handful (about 8 M&Ms). I happily munched until there were 4 left. Lo and behold! The remaining 4 were all blue. “What are the odds,” I asked myself. So I set out to find the answer.

I started by figuring out how many different M&M colors there were. My bag had 6:

Then I assumed that there were an equal number of each color in the bag (that may not actually be true, but it makes the problem a tad easier to solve).

Armed with this information, I started up the wayback machine to go back to Computer Science 235, when, back in my college days, I studied probability. This is when I realized that I had forgotten pretty much everything I knew about probability, except dice rolling odds (which I use in Risk to conquer the world). So it turned out that memory lane wasn’t that helpful after all.

At this point I decided that I should compute the odds of choosing a handful of 8 M&Ms at random with at least 4 blue ones, this being a prerequisite of having 4 blue ones left in my hand after eating the other 4. To do this, I first drew 8 boxes on my white board, to represent the 8 M&Ms I could draw at random. This helped me reason about the problem. For any given box, I have a 1 in 6 chance of drawing a blue M&M. If I draw a blue one for a given box, that leaves 3 more I would need to also randomly draw. So I started enumerating a few permutations that could make this happen:

And so on. I realized pretty quick that there were too many permutations to enumerate so it was time to get analytical. I started to reason this way:

So if I were to compute the odds of choosing all 8 blue, it would look something like this:

That’s a good starting point. Since we don’t have to choose all 8, but only 4, blue M&Ms, we can just throw out 4 of the terms, so we end up with this:

This is when I started getting confused. I started to wonder if maybe the 8 don’t have anything to do with the problem at all. Maybe the odds of choosing 8 at random, eating 4, and being left with only blue are the same odds as just randomly choosing 4 blue M&Ms.

So I beat the odds that day when I had 4 blue M&Ms left. Without even trying, I did something whose odds were 1,296 to 1, against. I should have gone to Vegas that afternoon.

7 comments to “Never tell me the odds!”